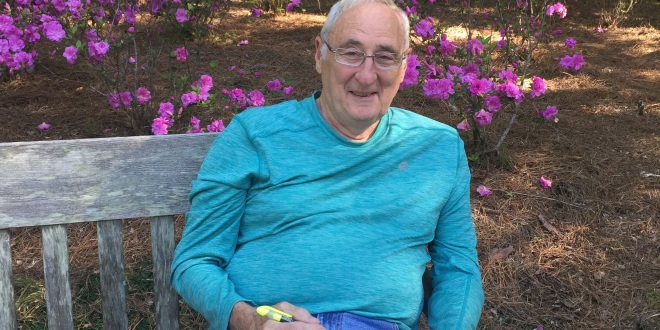 I am a 80-year-old man who has been married to the same beautiful woman for 56 years. We have 5 children and 16 grandchildren and 3 great-grandchildren. Both of us are retired middle school teachers and currently live in Dothan, Alabama. I also retired as a Navy Chief (R) and spent close to 58 years in ministry.  I love to read and to teach. Before The Red Shoe novel, I wrote poetry and songs. The Red Shoe was my first “novel” attempt.

My hobbies have included reading, fishing, hunting, training dogs, growing roses and playing strategy games on the computer. I like novels about wooden ships and iron men but I have read just about every genre and enjoy almost anything that is well written.

I have just completed a second master’s, this one a Masters of Theological Studies and spend a lot of time preparing lessons for the adult Sunday School program at the Westgate Church of Christ.

I have owned four Vizslas and two of them were named Tisza. The name was suggested to me by a former professor of math where I attended college who happened to be Hungarian. He said it was a river in Hungary. I have owned a variety of dogs in my 79 years but none of them could compare to the Vizsla breed. They are the easiest to train and the most loyal of all I have worked with.

I write a religious blog which is on this site and can be viewed five days a week. Currently, I have eight books published which are available at most online bookstores.

The Old Man on the Mountain

To the Faithful Saints at Ephesus